A 7-year-old boy, who was by the Texas shoreline, spotted something out-of-the-world. A strange creature that has ever since come to be known as a blue dragon. The weird sea creature was spotted at Texas’ Padre Island National Seashore where it had washed up. Officials have warned people not to get too close to these; supposedly, their sting can be quite painful.

The venomous blue dragons were at first mistaken to be blue button jellyfish. According to the little boy’s parents, the boy picked up the creature and told his parents that he discovered a new species. The creatures that are being called blue dragons are colourful as the name suggests, and are actually called Glaucus Atlanticus. These are known as natural predators of Portuguese man-of-wars or man o’ wars, which is a species close to the jellyfish. They are small creatures, but the Padre Island National Seashore issued a statement on Facebook saying, “Don’t let their size fool you, they have a defense worthy of the name dragon.” 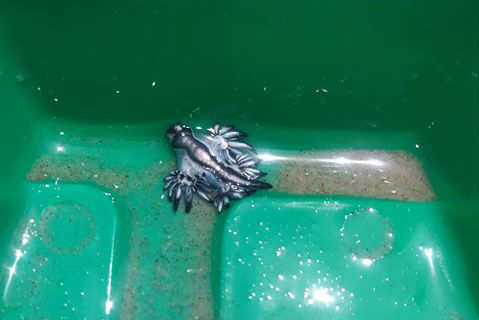 According to experts, these little blue dragons actually manage to move the stinging cells from the man o’ war to the end of their fingers after preying on them. This is done so that they can concentrate the stinging cells together, thus making their sting much more painful than their prey’s. That is a great strategic move to win a fight.

People have been advised not to come in close contact with these, and never to pick them up from the shores. They are typically found in the Atlantic, Indian Ocean, and the Pacific Ocean.