COVID-19: Manali to shut down from March 22; hotels cancel bookings

Like other tourist destinations in Himachal Pradesh, Manali too has opted for a complete lockdown of its restaurants, travel agencies, shops, taxi services, tourist bus services and other public services starting Monday till March 31. The decision has been taken considering the will of the residents, and tourists that are currently in Manali have been asked to leave the town by Sunday, March 22.

According to the news reports, the residents want to distance Manali from outsiders for some time in their bid to avoid COVID-19 transmission. On March 19, the representatives of all trade unions, associations and panchayats met for an emergency meeting with the sub-divisional magistrate. It was decided to voluntarily shut all public services from Monday till March 31.

For now, it has been decided to continue pharmacy and grocery services, and other essential supplies for the residents. Hotels and travel agents will not be able to take advance booking till March 31; if the booking has been already made, tourists are being told to cancel or reschedule their booking.

TOI reported Raman Gharsangi, Manali SDM, as saying that the essential supply services will not be hampered. Although due measures are being taken to keep COVID-19 at bay, locals have also been asked to exercise vigilance in this matter. 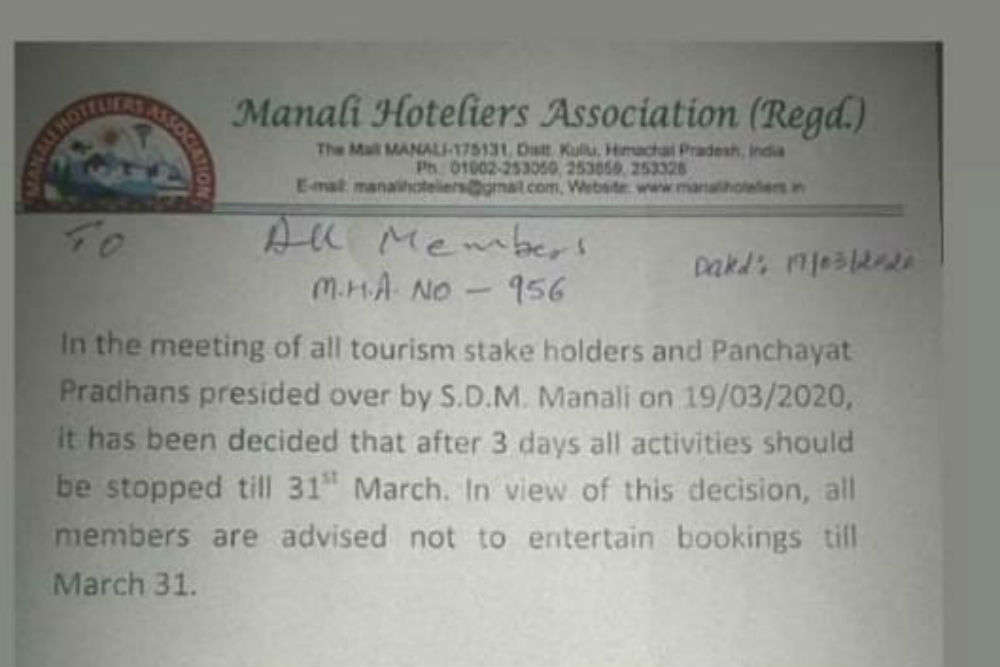 Reportedly, the local administration has asked the shop owners who will be keeping their shop shutters closed, to display their phone numbers outside the shop as a handy help to anyone who would need the supplies.

Gharsangi also told TOI that the local residents and tour operators have been directed to guide the tourists in leaving the town with due support.

Meanwhile, travel agencies and several hotels are refunding 100 percent booking amounts to the tourists who are being told to cancel their booking till March 31. Several tourists are vacationing in Manali presently.

Starting March 22, Volvo bus services will also not be operational on the Manali-Delhi and Manali-Chandigarh route.