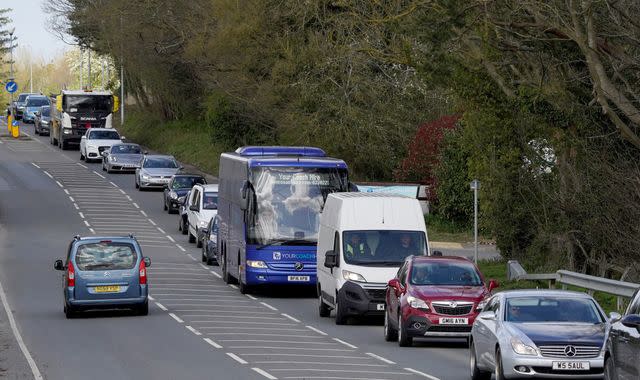 Drivers are being warned to expect the busiest Easter on record, as millions of Britons prepare to hit the road this weekend.

An estimated 21.5 million leisure trips will be made by car between Good Friday and Easter Monday, the RAC says.

That’s the highest number since the organisation began tracking motorists’ Easter plans in 2014.

Good Friday is expected to be the busiest day, as people look forward to being able to make plans free of any COVID restrictions for the first time in three years.

It’s also going to be the most expensive Easter on record for fuel prices, as the latest government figures show the average cost of a litre of petrol on 4 April was 161.9p, with diesel at 176p.

There are also warnings of continued disruption at airports caused by COVID-driven staff absences, and on the trains thanks to engineering work.

Where will traffic be particularly bad?

According to traffic information supplier Inrix, these are some likely congestion hotspots:

Large traffic queues are also likely to continue on roads in Kent, thanks to a shortage of cross-Channel sailings caused by the suspension of operations by P&O Ferries after it sacked nearly 800 workers.

Drivers are being advised to set off before 9am to avoid queues, or wait until after 7.30pm to leave home.

RAC traffic spokesman Rod Dennis said: “After two years of relatively quiet Easter bank holidays on the roads, our research suggests a return to traffic levels that are much more typical of this time of year.

“It’s very possible this weekend could turn out to be one of the busiest for leisure journeys for many years.

“Add in the impact of disruption on the rail network and one of the biggest fixtures of the sporting calendar taking place this weekend, and you have all the ingredients needed for problems on the roads.

“Traffic volumes will likely be even higher if some warm spring sunshine makes an appearance.”

Speaking of the weather, how’s it looking?

After a cold spell for many, the Met Office says temperatures are on the rise in the coming days and could reach a positively balmy 20C (68F) in southern England by Thursday.

For the Easter weekend itself, it should remain dry with light winds, but cloudier conditions are expected.

The outlook is better in the South East, where it should remain settled, while the North West should brace for some strong winds and rain.

What about travelling by plane or train?

It has been a rough few days for some of Britain’s biggest airports, as soaring COVID cases forced flight delays and cancellations for British Airways and easyJet.

Disruption is likely to continue, with Manchester Airport warning departing passengers to expect delays of up to 90 minutes this weekend.

As for the trains, passengers are advised to check before they travel to see if their plans are affected by any one of Network Rail’s 530 engineering projects.

The West Coast Main Line will be closed between London Euston and Milton Keynes from Friday to Monday as upgrades are carried out on the existing line, with HS2 work also ongoing.

This will impact any Liverpool and Manchester City fans heading to the capital for their teams’ FA Cup semi-final at Wembley on Saturday.