India funds restoration of Myanmar pagodas; a look at some of the famous pagodas in the country, Myanmar

Nearly four years ago, Myanmar suffered some severe damage because of an earthquake and several ancient pagodas (religious centres housing Buddhist relics) were destroyed. Now the Indian government is helping the country with financial aid for restoration and conservation of pagodas in Myanmar that were harmed. The project is completely funded by the Indian Ministry of External Affairs (MEA). The restoration work was supposed to begin in January 2020, but it got delayed due to the COVID-19 pandemic.

However, the Indian government has restarted the restoration work in Myanmar now. In the first phase of the restoration work, the Archeological Survey of India will be renovating 12 pagodas in the ancient city of Bagan, also a UNESCO World Heritage City.

On this note, let’s have a look at some of the most famous pagodas in Myanmar: 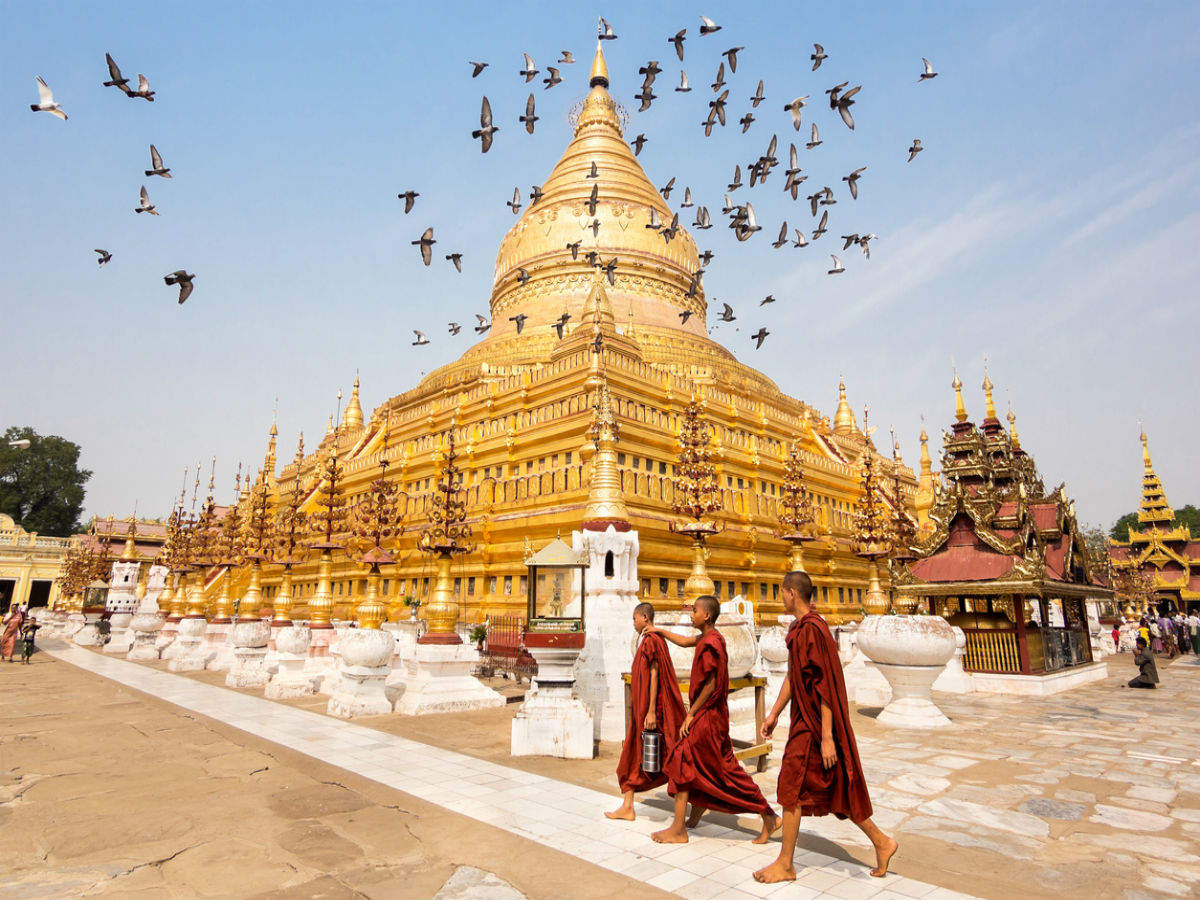 This one is probably one of the most famous pagoda-temples in the whole of Myanmar. Also known as the religious heart of Bagan, this beautiful temple remains crowded with devotees most time of the year. Mornings can be extremely crowded. The place was constructed on the orders of the King Anawratha. It is said that his sacred white elephant, who was carrying relics of the Buddha, stopped and knelt at this very spot, so the king decided to build a temple here. The temple features four enormous Buddha statues, and one of these is quite unique as the facial expression of the Buddha changes according to where the person is standing. Dhammayangyi is another renowned Buddhist religious center, which is also known as the largest of all the temples in Bagan. It was built during the rule of King Narathu (1167-1170), who acquired the throne by kissing his own father Alaungsithu and his elder brother. It is said that he built this temple to atone for his sins.3) Mahamuni Pagoda, Mandalay 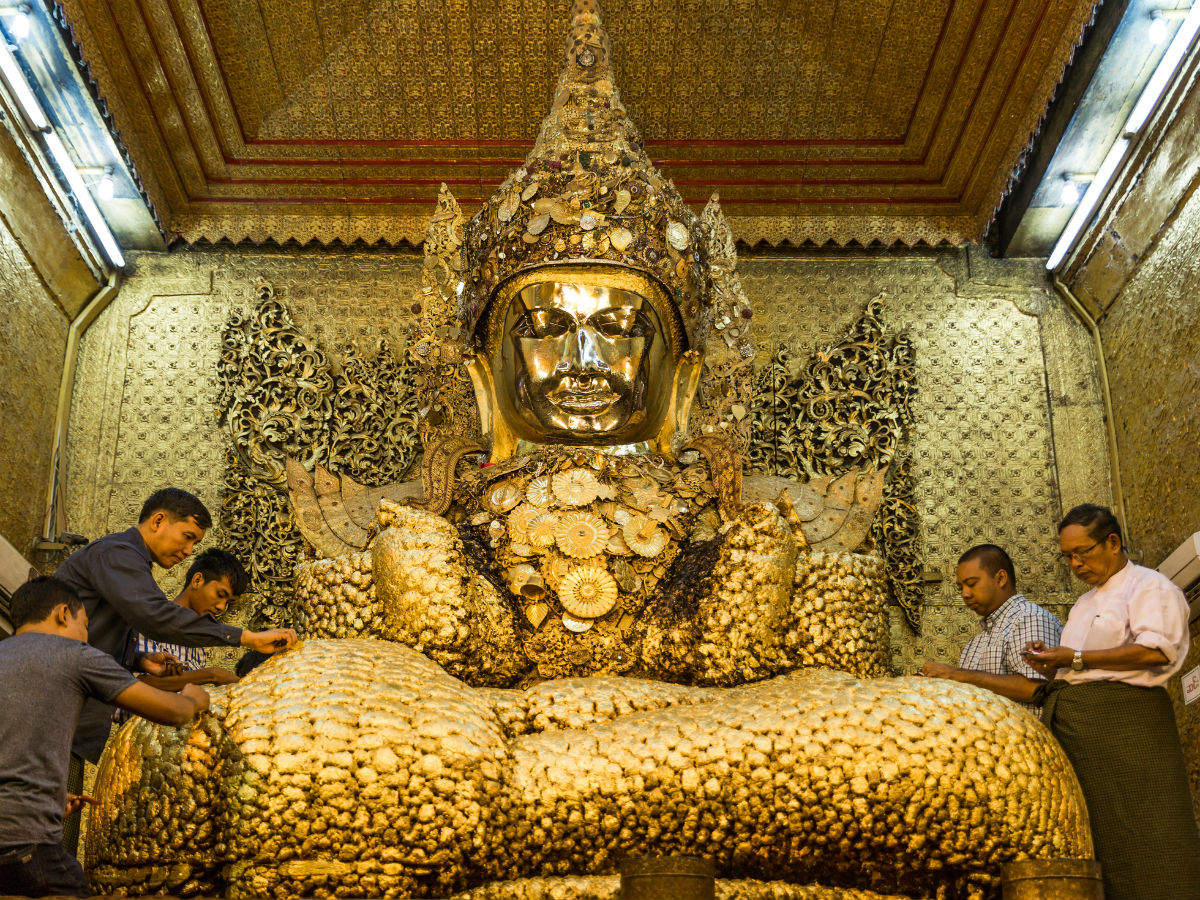 Also known as the Mahamuni Buddha Temple (The Great Sage), this pagoda on Mandalay Hill is a major pilgrimage center in the country. People also come here for breathtaking views of the city, extending out to the river. Sunset is the best time of the day to visit the place. 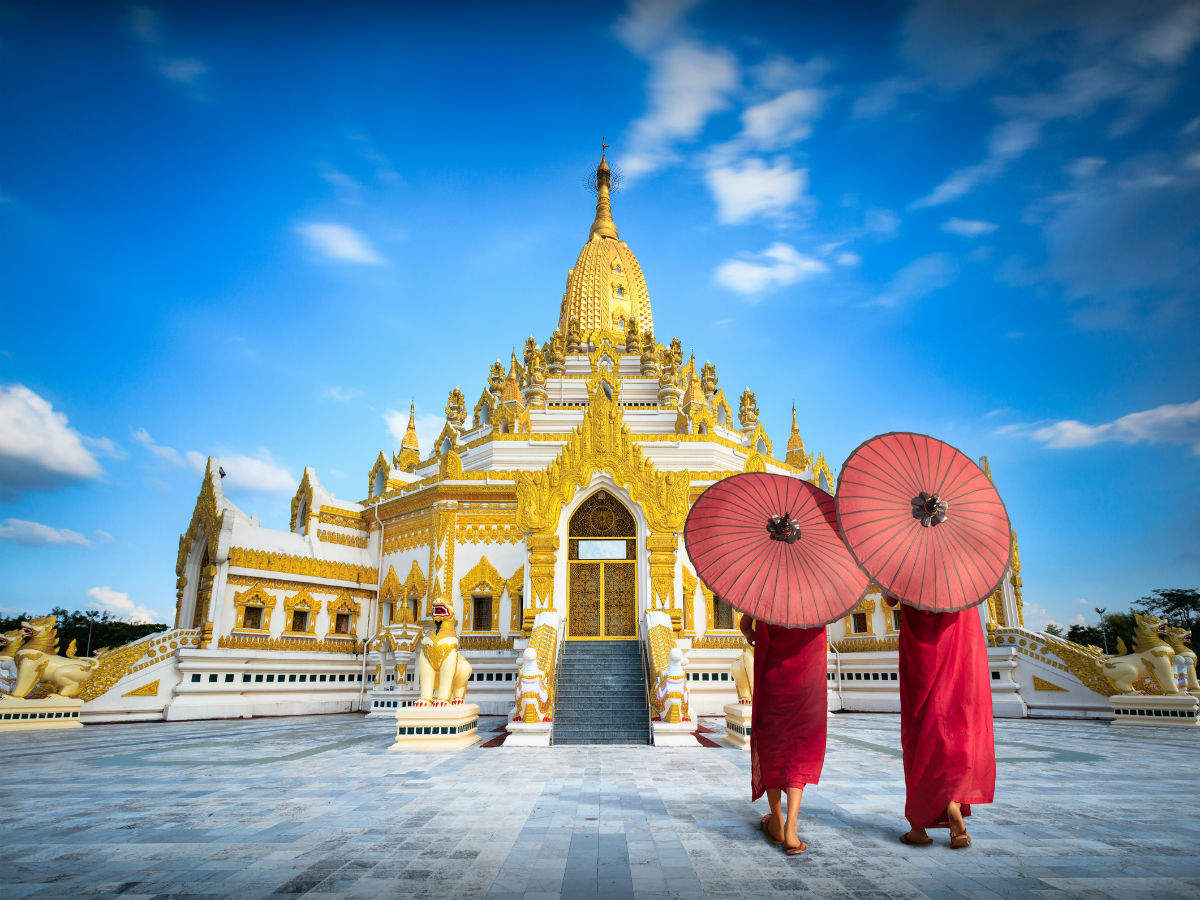 The Shwedagon Pagoda has many names, including Shwedagon Zedi Daw (official name), the Golden Dagon Pagoda, the Great Dagon Pagoda and the Golden Pagoda. By far, this one is the most photographed pagoda in Burma. Though nothing much is available about the origins of this pagoda, the local legend says that the original pagoda was built nearly 2500 years ago, which makes it a must-visit tourist attraction in the country. 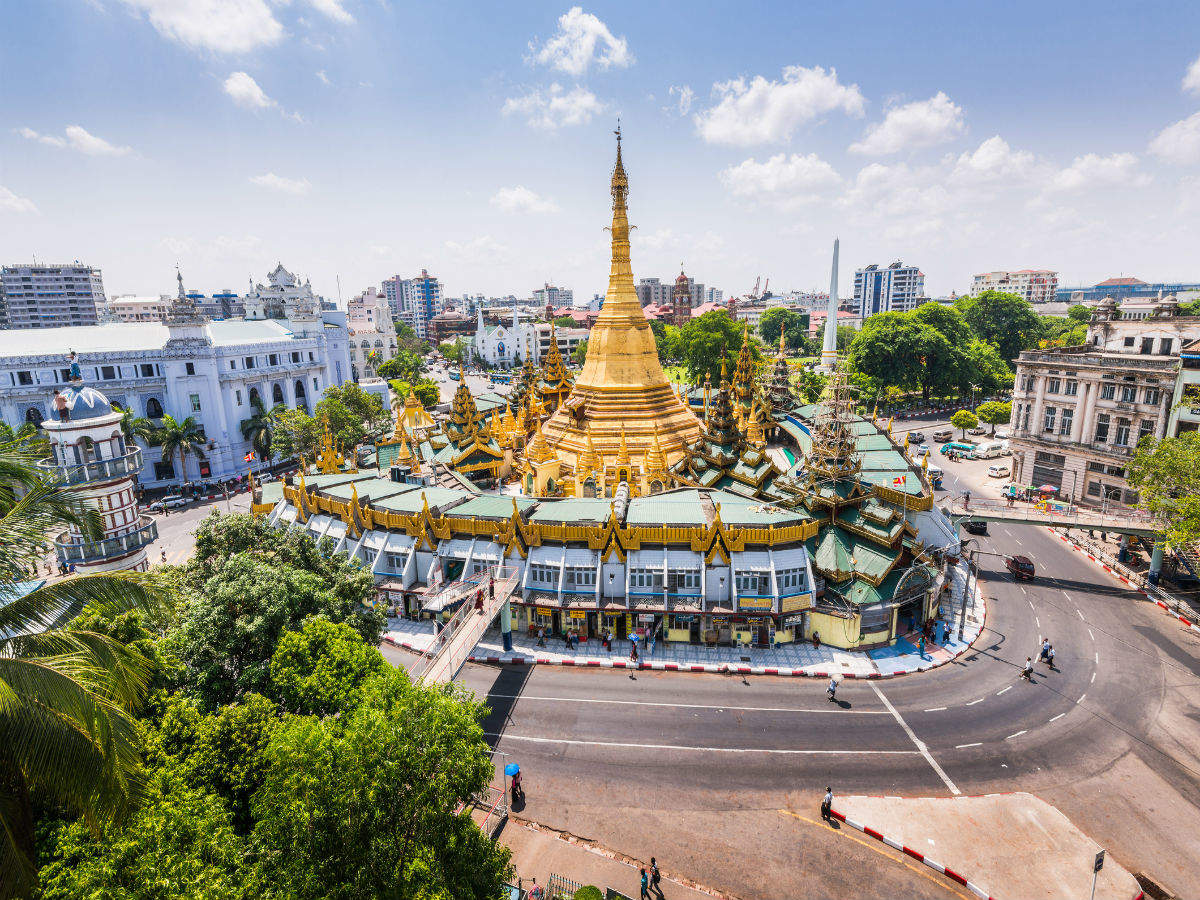 Sule Pagoda in Yangon is a 46-m tall pagoda, built in octagonal shape. Legend has it that the pagoda was constructed 2000 years back to keep a strand of the Buddha’s hair! The place also features some interesting galleries, which are an oasis of calm. 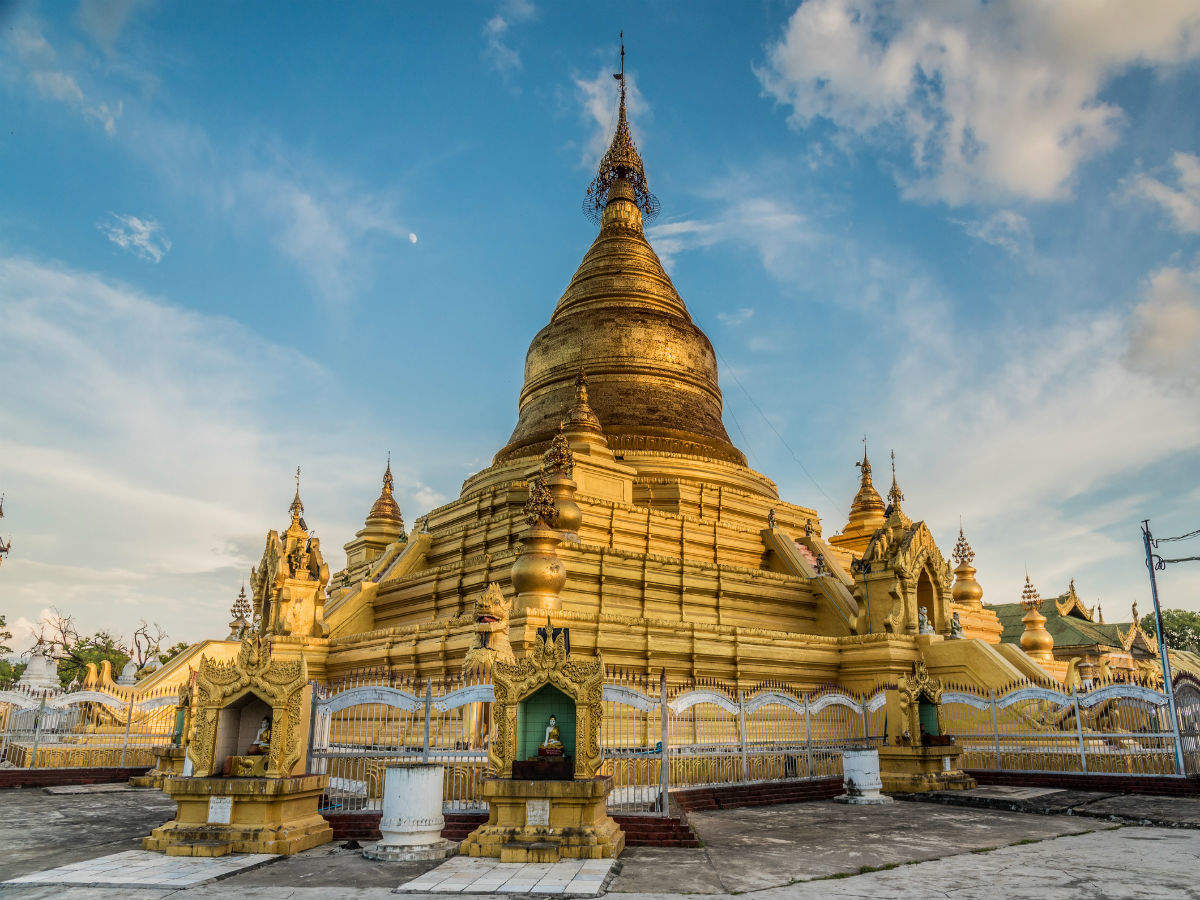 The Kuthodaw Pagoda is known for being home to the world’s largest book! This Buddhist pagoda sits at the foot of the Mandalay Hill and was constructed during the time of King Mindon. The stupa is 188 ft (57 m) high, and is modelled after the Shwezigon Pagoda in Bagan. A prime feature of the pagoda are 729 stone-inscription caves. Each one of the cave houses a marble slab inscribed on both sides with a page of text from the Tripitaka, the standard collection of scriptures in the Theravada Buddhist tradition written in Pāli language.