A flamingo at the Sambhar Salt Lake

When we speak of Rajasthan, all we can think of is Jaipur, Jaisalmer, Jodhpur and Udaipur! While all these places are supremely stunning and colourful, there are still some equally gorgeous destinations in the state which are still waiting to be explored. One such place here is Sambhar Salt Lake, situated about 80 km southwest of Jaipur. Most of the people might not be aware of the fact that it is also India’s largest inland salt lake, which makes it extra special.

Let’s know more about this lake in Rajasthan.

Where is Sambhar Salt Lake? 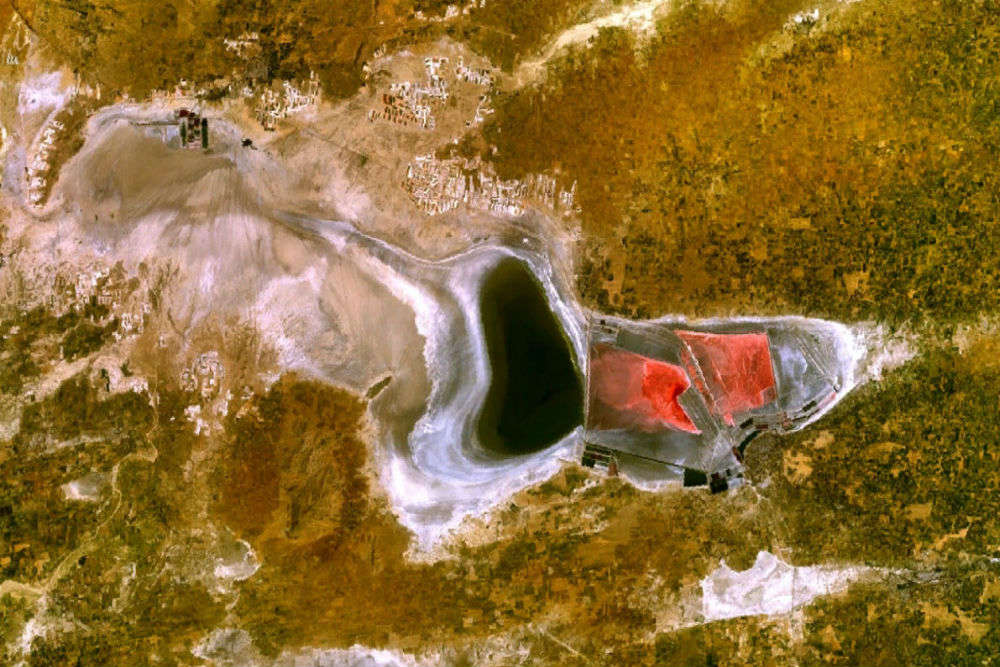 A bird-eye-view of the Sambhar Salt Lake

Sambhar Salt Lake in Rajasthan is 80 km from Jaipur and 65 km from Ajmer, and envelopes the beautiful and historical Sambhar Lake Town. This inland lake receives water from five rivers, namely Samaod, Khari, Mantha, Khandela, Medtha, and Roopangarh. The area occupied by this lake differs from season to season, so roughly it is between 190 and 230 sq km.

Also, being an extensive saline wetland, the depth of the lake also fluctuates from season to season. During peak summers (dry time), the depth measures as low as 60 cm (24 in) but during the monsoons, it goes up to 3 m (10 ft). 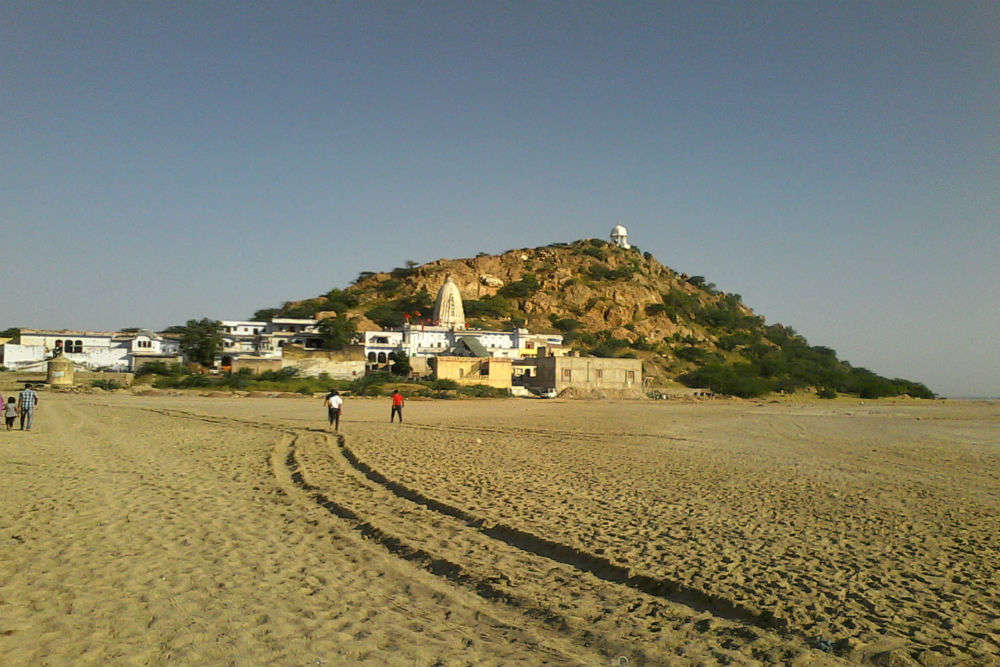 The history of this place goes back to the era of India’s one of the famous kings, Prithviraj Chauhan. People say that the king was an ardent devotee of Shakumbhri Devi, the guarding goddess of the Rajputs. He once prayed to her with all devotion, afterwhich the Goddess blessed him by fulfilling his wish. She converted the dense forest in the region into a silver land for the prosperity of the people. Later, people got worried about the safety of such a possession, so the Goddess again turned the silver land into silvery salt lake so that people are benefited from it. Since then, the lake has been a saving grace and helping people sustain in this region.

The place also finds its mention in the Indian Epic, the
Mahabharata; a number of excavations have taken place here that lead to the discovery that people existed in this region from 2nd century BC to 10th century AD. There’s also a Devyani Sarovar temple which is quite revered among villagers here, and it is also believed that the legendary king, Akbar got married to Princess Jodha in this temple way back in 16th century.


Yes the gorgeous flamingos throng the lake during peak winter season. The migratory birds from Northern and Central part of Asia come down flying here and turn the entire region into a spectacular spectacle! The algae and warmth of the place attracts these stunning birds here every year in huge numbers and paint the region pink. 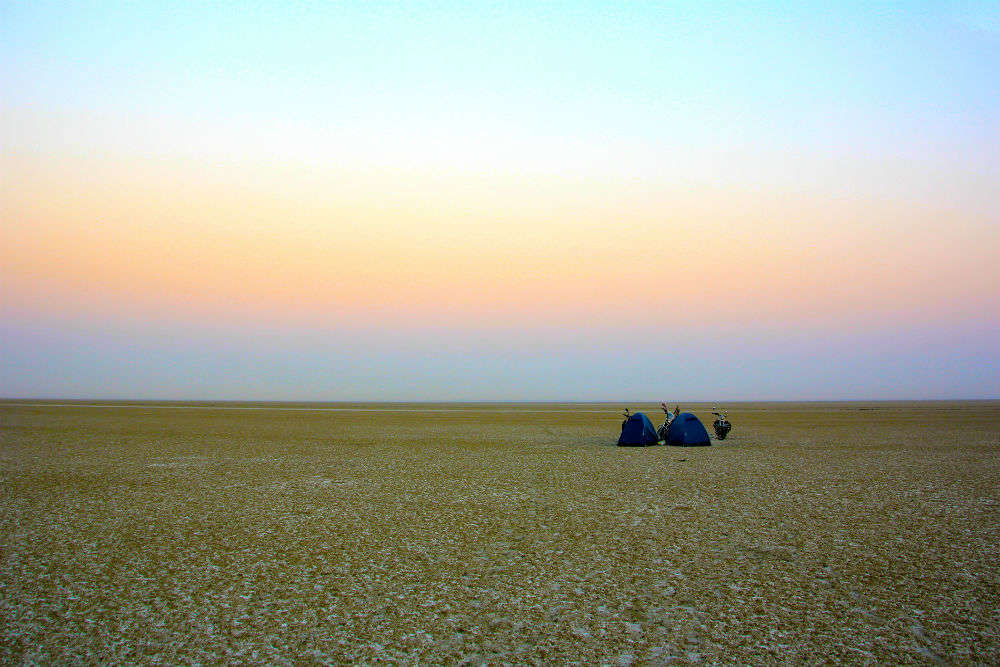 Being a lesser-known destination, there aren’t many options but some really amazing eco-friendly tents and resorts are available here. There’s also a circuit house which was set up in the region by the British people, who did salt farming and exploited the area. 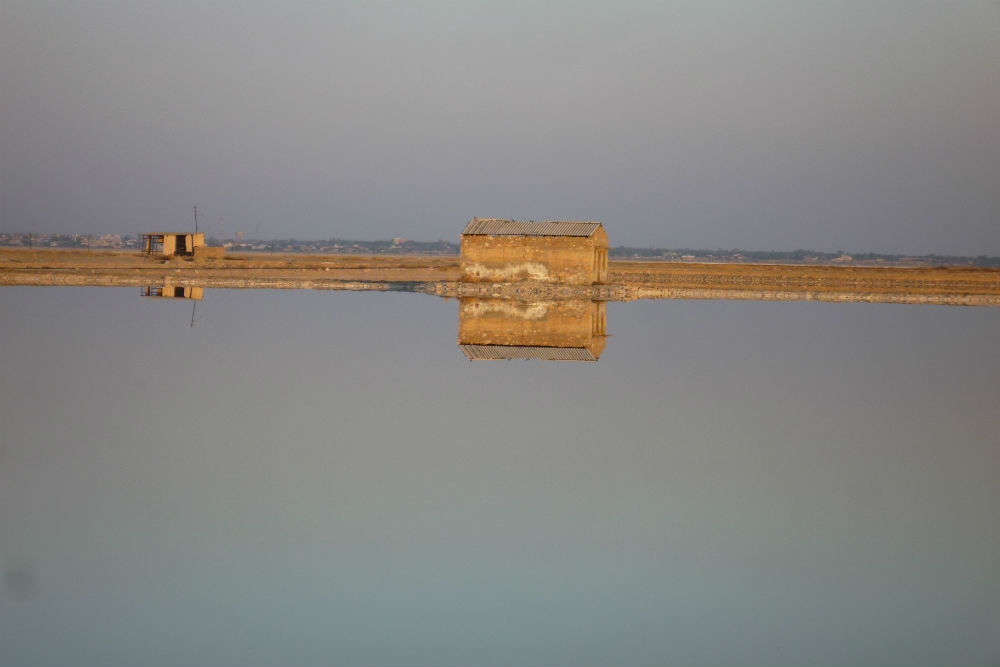 One can easily drive from Delhi and nearby region and book a tent here. It is an amazing place for people who enjoy star gazing. The spot is just super perfect for them. Besides, the tents and resorts here arrange bonfires, local meals and other camp side experiences.

So now we have a new destination to explore in Rajasthan besides the usual ones!