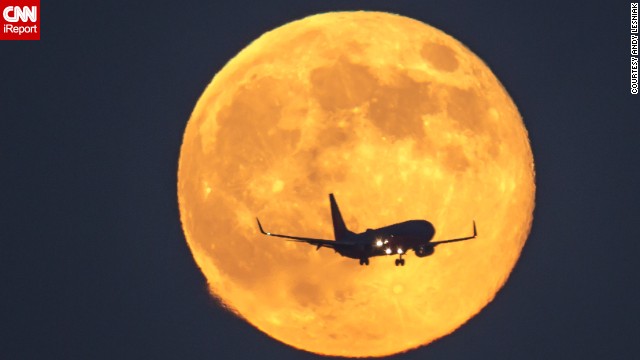 The Moon Festival falls on the 15th day of the eighth lunar month.

In China and parts of Asia it’s believed to be the day with the brightest moon of the year.

It’s also the first time in more than 30 years that a supermoon and a total lunar eclipse are happening on the same day.

To welcome the day, companies in China are introducing a range of “moon-viewing flights.”

Spring Airlines, the country’s budget airline, will offer around 100 scenic flights from September 26 to 28.

“Festivals are the days when homesickness is at its worst,” Yi Mao, the airline’s head of marketing, tells CNN. “And Moon Festival is an important festival for the Chinese.”

It’s a day of reunions for families and friends in China, who will come together to eat mooncakes under the full moon.

“We hope the moon-viewing flights will take care of the emotional needs of our customers who are still on the road during the festival.”

Even if the weather’s cloudy on the ground, there will be an unobstructed view once the plane climbs above the clouds.

More than 100 of Spring Airlines’ seats dedicated to the festival have been sold so far.

‘Sit on the right when flying from Shanghai to Tokyo’

But there won’t be much difference when looking with the naked eye.

“Spring Airlines’ operations control center analyzed the movement of the moon and the flights’ routes to come up with a list of moon flights,” says Mao.

If you’re flying from China’s north to south during this period — from Luoyang, Henan, to Hong Kong, for example — it’s best to sit on the left side of the aircraft.

Likewise, if you’re flying north you should sit on the right.

From 8:30 p.m. to 10 p.m., the ideal seats are on the left if the plane is moving from east to west and on the right if going from west to east — like from Shanghai to Tokyo.

The carrier reminds passengers that mobile phones shouldn’t be turned on during the flights.

Moon-gazers should plan to take pictures with a regular camera instead.

Moon-viewing around the world

A supermoon happens when the moon moves to the point on its orbit when it’s closest to Earth.

The moon will appear 14% larger and 30% brighter than when it’s at the farthest point on its orbit.

According to NASA, the eclipse will be visible in the Americas, Europe, Africa, parts of West Asia and the eastern Pacific, with the action starting on September 27 at 8:11 p.m. EDT.

The total eclipse will commence at 10:11 p.m. EDT and last for one hour and 12 minutes.

Catch it while you can. The next time a supermoon is expected to coincide with a total lunar eclipse is in 2033.